How to keep squirrels from eating garden tomatoes! 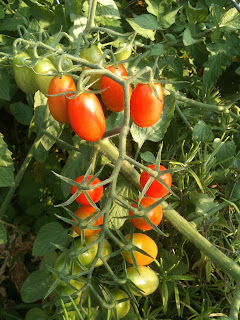 Squirrel terrorist will not feast this year on my produce!

I love my garden and last year I battled squirrels stealing my produce before I could pick it. There were tomatoes with bites on tree stumps, there was actually a line of tomatoes down my neighbors driveway - all with one bite each and there were tomatoes left on my walking trail. The smaller tomatoes where seen in trees - bright red orbs waiting for later feasting.

One again this year, squirrel terrorists raided my garden sometime when no one was watching. They got my first tomato and they ate my first green pepper - I was tired of battles -

I was going to win this squirrel war and I DID for less than $20.00 and a trip to the sporting good store, the hardware store and the dollar store! 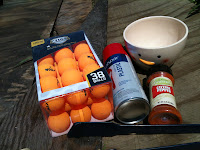 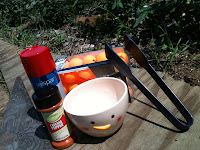 38 fluorescent ping pong balls, one can of red plastic spray
paint, a jar of cayenne pepper, tongs and an old bowl

1. Pour Cayenne pepper in bowl
2. Holding a ball with the tongs spray with paind 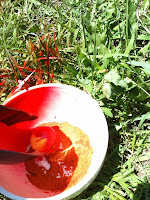 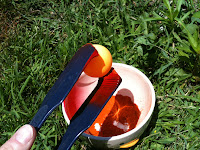 3. Using a tong roll wet painted
ping pong balls in Cayenne Pepper
DO NOT HANDLE THESE with your hands
USE CAUTION in coating the balls 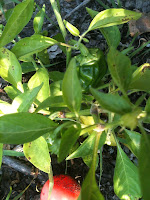 4. Using the tongs place the cayenne coated balls
at the base of your plants

It has been two months and at first the balls moved a bit from
place to place. They seem to now never move and in addition I have loads
of tomatoes and produce without squirrel bites!

PLEASE USE CAUTION when doing this
but it WORKED!