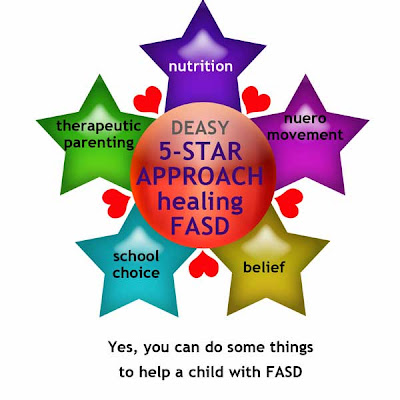 
Whether a child has a diagnosis of Fetal Alcohol Spectrum Disorders (FAS, ARND, Partial-FAS, or anything in between) or a suspected exposure, the few professionals who know something about FASDs, along with the literature, talk about the 'permenant brain damage" that ensues. Damage to the brain is certainly accurate but 'permenant' may no longer be true. We have learned a lot in the last 5-10 years about how plastic the brain is, how different parts can heal or take over for other parts, and how new neurons can grow over time.

Because of these new neuro findings, we need to look at FASD a bit differently.

It should be noted that the alcohol that damages the brain damages different parts of the brain in different people. Some of this can be because of the amount of alcohol ingested, the time just before and during pregnancy in which the mother was using alcohol, the number of occasions in which the woman drank, the nutrtional state of the mother before and during the pregnancy, whether other drugs were also ingested, if the mother smoked, lived an unhealthy life-style, received pre-natal care or not, what kind of emotional life the mother was experiencing (whether she was abused, under stress, etc.) and many other things that could affect the fetus at anytime, with or without the alcohol exposure. Add these things to the alcohol exposure, and the direction of the damage is on its course.

There are also the things that happen to a child after birth.


I often have people ask me what we have done to try to heal my son's FASD. I can tell what we have done but I cannot tell others that all of this will work for them. I feel very strongly that what we have done (some learned from the autism community) has been very effective. I also have to say that it took years and years of trial and error to get all of this put into place. I can't help but wonder if we had done all the interventions earlier, if things would be even better. But, one cannot dwell on such conjectures. We did this on our own, unable to find doctors who knew anything that would help us. Now a days, there is more help out there and I would suggest that finding doctors who can help, would be the best route. 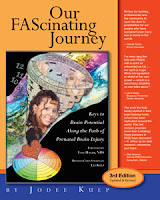 There are 5 intervention strategies that I think are vital:


Nutritional Therapies: for us, this started with eliminating all food dyes (Red#40 made my son almost bi-polar!) and to keep them out of shampoos, lotions, toothpaste, etc., because these are absorbed through the skin; eliminate all chemical sugars, all corn syrups (not just high fructose corn syrup), and to go as organic as possible, eat grass-fed beef, eat chicken and eggs that are hormone and anitbiotic free and which are free-range. A lot of children may need to be taken off casein (most dairy products) and/or gluten (most grains). For those who are nervous about their child not getting enough calcium from milk, just remember that calcium can be found in many other sources and there are many substitutions for cow's milk.
The Neuro-Movement therapies helped to re-organize

Each part of my star helped to fortify the other points. I chose the right schools (I only knew this for sure after the fact, of course) and found other people, at school and at a church I joined just for what my son needed, to nourish my son, to help him along the way, to understand him in all his 'differences,' to give him the examples that his 'chameleon self' needed.

Is my son "cured" of his FASD?

No. There is no cure, as of yet. But, healing can take place. It's like children who have polio: do we leave them in an iron lung or do we do something so they can be in a wheelchair or using a walker or crutches or even, to get through life with just a limp. We are working towards the limp! 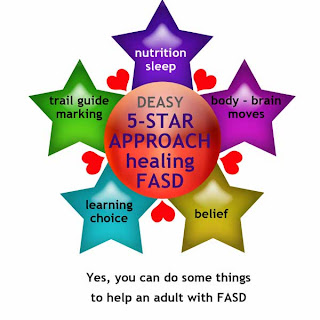 Is any of this easy?


So, let's be the change we want to see.

We will do whatever we need to do to heal our children. We will fight for them, guide them (even as they try to get us off their backs), support them, and keep them close and safe for as long as they need us to do this.

And then, let us give them a chance to spread their wings and try life on their own... but knowing that we tried everything we knew how to get them to that place.
Posted by Unknown at Wednesday, April 10, 2013

Jodie...Darlin Dee here....L love this 5 star approach graphic. Did you make the 5 star graphic? I really really love it! If you did make just wondering if the wording can be change a wee bit...as FASD is lifelong and cannot really be "healed"...I totally get what the stars in place can do in a positive way to help but just worry that some parents will think that FASD will go away if they do these things. Obviously with all those supports in place a person with FASD will be successful...but not healed. Does that make sense? You can message me on facebook if you'd like!!