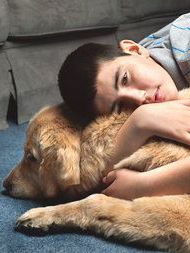 A Golden Retriever Was the Only Thing That Could Reach a Raging, Disconnected Boy

The Winokurs of Roswell, Georgia, had no idea of the journey that was in store for them when they adopted son Iyal and daughter Morasha, two seemingly healthy babies from Russia in 1999. Iyal’s eventual diagnosis at age four with fetal alcohol syndrome (FAS) the most severe expression of (FASD), a debilitating and life-long birth defect, forever changed their lives.
Atlanta journalist and award-winning author Melissa Fay Greene eloquently captures this family’s challenges and triumphs and the hope they found in an unlikely source—an 80 pound golden retriever named Chancer, the subject of Donnie Kanter Winokur’s new book, Nuzzle – love between a boy and his service dog–in her February 5 feature story, “Wonder Dog.”

The importance the story clearly resonates with readers around the world. The article has been live on the New York Times website for just five days, and it is the NUMBER ONE emailed story, the NUMBER ONE most-searched story and among the Top 10 most-viewed stories on the site. Clearly, the Winokur family journey dealing with a child of fetal alcohol syndrome is one that touches people’s lives.
Read Full Article