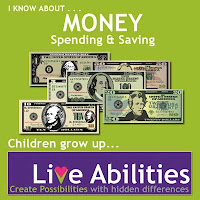 The word BUDGET
does not fit in with FASD jargon.

One of the hallmarks of FASD is their inability to understand money. 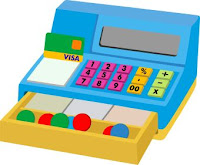 Too many steps, too much abstract thinking and of course too much planning ahead for someone struggling with executive function deficits.

With my adopted sib set, I have had many lessons in what to do, not do, and what to expect with money and their FASD.

First, a REP PAYEE or SPENDING MANAGER needs to be in place or they will face many problems that can have huge ramifications. Bill collectors, homelessness, hunger and too many phone calls home to Mom and Dad.  My phone rings way too often from bill collectors who were given our numbers trying to find one of my FASD adult children who have no concept of money, no job, and no ability to pay back the bill.

I have learned any money in their hands is NOW MONEY and it will be GONE in an instant. So lets get started in helping our young person... 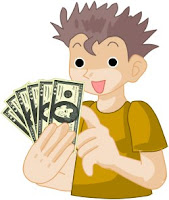 Money is abstract...  they need to see the money. If the money is automatically drafted into a bank account they cannot see it. They do not understand something that is not tangible. Debit cards, checks, credit cards are a disaster.

They need to have CONCRETE RULES around money.

The word BUDGET does not fit in FASD jargon. A friend of mine suggested  SPENDING PLAN.


What do they do with their money? SPEND it.


What do they need to save for next?
THEN the allowance or fun money!

Slowly dole out the remainder in short increments on the same day of every week to avoid the "I need more money" phone calls.


But how do we help them understand money and how much and where it all goes when they do not understand math, or time, or planning.

I watched the Cosby Show with my younger boys when they were teens and a light bulb went off when Cliff Huxtable was trying to explain how little money he was going to have if Theo did not get a good job because he did not want to attend school.  Cliff used Monopoly Money to give Theo the money he would earn on a mediocre job and where it would all go. Cliff pulled the money for Rent, Theo said he would live in a less attractive apartment and pulled some back, then he pulled the money for the car and Theo said he would ride the motor bike, and asked about clothes, and of course Theo gave up some money as he wanted to dress well. Then Theo pleased with all that was left and Cliff reminded him he still needed to eat. There went another two hundred dollars and Theo took back another hundred and said he would eat bologna and cereal. Then Cliff asked him if he was going to have a girlfriend and after a YES, a smiling Dad took the rest of his money. (The Episode of Cosby we watched with my boys ).

My boys were shocked by the episode on TV and it sparked a learning moment that I will never be more thankful for. They understood the concept of spending plans.

I have used it to help explain where all their SSI checks would go, I have used play money to represent the real money sitting in the bank. It has made an impact.

My favorite Money Set to help with my kids
I used this set to teach my kids to count change, make change, and figure out anything to do with money.

Otherwise go hit up the dollar store for play money to use to show where the money goes.

** Note always use play money as real money may be too tempting for many of the kids with FASD, I learned early on that my counting change jar would turn up missing and no one had done it, even when confronted with the change in his pockets.

Granted any money left, would be spent in a moment of impulsivity.