I can't believe it! You CAN drink alcohol when you are pregnant? 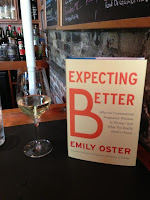 "Wow, oh wow. What can I even say? As adults we live as active of life and more independently than many persons who share our secret. Oh and we've been down the path of experiences no parent wishes for their child. I know what it feels like to have your book published and I am sure Emily Oster is excited. "Expecting Better: Why the Conventional Pregnancy Wisdom is Wrong—and What You Really Need to Know," by Emily Oster to be published Aug. 20 by the Penguin Press.

Please read her book and then read mine before you make a decision to celebrate 0-4-9. It is such a short time of your whole life! 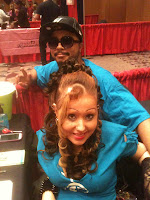 My name is Liz Kulp, any woman who is able to have a baby is very blessed. My birth mother was blessed to have me. She was a single mom, who drank wine and as far as I know - not by the gallon. But her life choices became my life. And my life is not the life you want for any of those future beautiful children like Penelope. There are a lot of things that can create the secret most people don't see when they meet me. They don't see that I understand every third or fourth word of a conversation. People think I know what they are saying. Some of it I do know and some I don't, then later I have to figure it all out on my own—that is overwhelming. Perhaps you say I should just say I don't understand. Well, Emily I have tried that, and what happens when I do, people began to use more words and they add to my confusion. Or they slow down their speech as if I have no brain and treat me like a child.  If I trust you, I will tell you I need more information, but I have found over the years that people with high intelligence get frustrated when they try to help me so I remain quiet. Note, I am not an unintelligent person. I am differently intelligent. In fact, some of the ways I see the world may actually be a gift to you.

My life did not begin as a child who people thought would struggle with brain and metabolic injury and that is a problem that will haunt me for the rest of my life because the therapies that could have been in place when I was in preschool and an infant did not happen. As I said, my differences are a secret, and unless you REALLY know what to look for you will not see what I deal with everyday.
In fact, my grandmother, Dr. Carrie Kulp, a professor at West Chester believed I was gifted and so did my great-grandmother who graduated from college as a child developmental professional. That was because the parts of my brain that work very well are in concrete thinking.

Emily, I am a woman, and like you I love and grow and learn new things each day. But, unlike you my life experiences because of my mother's choice have been hindered. I won't go into the details - they exist in all my books. And why would I want to write such books. Because I know how hard life is for people like me and their families. I know how hidden our secret is. I know that unless you love a person like me and truly get to know us and our families you remain hidden from our reality. I have chosen not to follow my mother's path. I have been sober four years and if I am blessed with a pregnancy when I am ready to parent a child in a healthy way - I will give that child the best I have to give from it's beginning. I know the cost. I am the cost.

When I was two I spoke in paragraphs and knew 60 breeds of dogs — no one suspected. The clues were all there and they who needed to understand my needs did not see.


I like Ed Riley's statement to the Wall Street Journal

I find it amazing that the author wants to take on the responsibility of assuring so many women that it is ok to have “a glass of wine or so a day” while pregnant. She readily acknowledges that “all drinking isn't created equal,” but fails to recognize that all women are not created equal. There are many factors that go into determining whether consumption of alcohol during pregnancy might have an impact on the developing fetus, besides the timing, amount, and pattern of consumption. Additional factors that influence the outcome relate to nutrition, age and one’s genetics. A recent study out of England (Lewis et al, 2012) on over 4000 children found that several genetic variants controlling alcohol metabolism were strongly related to lower IQ at age 8. Importantly, the effect on IQ was seen in the offspring of mothers who were consuming 1-6 units of alcohol per week. If you had these genetic variants, but abstained during pregnancy your child did not show an effect on IQ. A unit is probably a little less than the standard American drink, which brings up another issue. Just how big is that one or so glasses a day you are recommending? A standard drink of wine is 5 oz, but over-pouring is the norm thus underestimating the volume consumed. I for one believe that most women are probably ok with a glass of wine now and then during pregnancy, but I just can’t tell who those women are. Individual genetics, drinking habits, and other contributing factors limit the ability of science to make the assurances that Dr. Oster appears willing to endorse.

To find the Emily Oster, the author and her new book on Facebook at fb.me/profemilyoster

To find my books visit www.fasdbookstore.com